The name John Rillie has become ubiquitous in Australian basketball online media. After bursting onto the scene in the National Basketball League as a shaved-headed Rookie of the Year with the Brisbane Bullets, he went on to play for the Adelaide 36ers, West Sydney Razorbacks and ultimately the Townsville Crocodiles. All the way, “The Real Deal” was regarded as one of the most feared shooters in NBL history — willing and ready to drop a dagger from deep at any moment.

During his time in Townsville, JR set up his blog, JR, On Fire. His interaction with fans whilst playing in the NBL and his promotion of the game for no financial return have been revolutionary in the game. Hopefully the league has been paying attention to how successful this form of PR can be for Australian basketball and JR’s fine work is replicated. Ever the giving and great character, John agreed to an interview with A Stern Warning to discuss his views on all manner of topics from the NBL to NBA to cage fights.

Mookie: This has been the first time in many years that you’ve not been preparing for an NBL, European or College basketball season — has your lifestyle changed much lately or is it still the same old workaholic, gym-rat JR?

John Rillie: For now my lifestyle has changed. I work a few different jobs around the traps and am trying to get involved in the coaching scene as well.  I look forward to helping the juniors of Townsville out and hopefully we can unearth some talent.  Beware of the U/16 Men’s team at this year’s State Classic.

I’m a gym-rat of a different kind now.  Trying to develop an eye for talent except on a Tuesday night when I cut loose in the local comp.

We’ve all seen a dramatic shift in the nature of the NBL competition in the last couple of years. Where do you see Australian domestic basketball in five years’ time?

In five years time I actually see the NBL being very strong amongst the sporting landscape. The sport is currently seeing a record number of kids heading to the USA college system.  This can only be good for the development of the kids and then ultimately the sport in our country.  (We first need to fix up the rules that we have in place restricting so many of these kids when they return.)

If the NBL can keep this thing moving forward, I truly see the sport regaining the popularity it discovered in the 1990’s.

You’ve mentioned recently that you’re involved with a Sports Management operation that is getting off the ground. Do you have any more details that you can share at this stage?

Sure.  Brevalto is the name oft he company and it involves myself and 2 other guys here in Townsville.  I’m hoping to use my experiences and knowledge to help out others in the professional ranks.

Also on board is Barry Gibson who has experience in the sporting arena as a CEO of several NBL franchises and other sporting bodies.  Let’s call him the negotiator.

To round out the group is Townsville lawyer Jeff Guy.

We feel as a company we offer the full package for any athlete that is looking for a professional service.

Although hoops is our bread and butter we are looking to expand into other sports.

Journalism or Sports Management? Which path do you have more of a passion for?

Journalism is a very loose term when describing my penmanship.  I love to put my thoughts out there (as I believe they are always right) although they may not be always represented with the best English.

Sports Management is exciting from the point of view of being able to identify talent but then being able to provide a platform for them to succeed both on and off the court/field/stage.I look forward to helping make a difference in an athlete’s life.

Apart from maybe Chris Anstey, you’ve been the first NBL player to make blogging a regular thing. Do you see player websites, twitter feeds and the like becoming a thing that the NBL embraces and promotes down the line to the mainsteam and perhaps a way out of the marketing holes of the past decade?

I believe this is an area the NBL/franchises have not really embraced or utilised yet.  I cannot figure out for the life of me how each club could not have one player blogging (or being interactive in the cyber world) for them.  I know you need the right guy, but there are guys out there that would love the opportunity.  There are plenty of personalities in our sport. 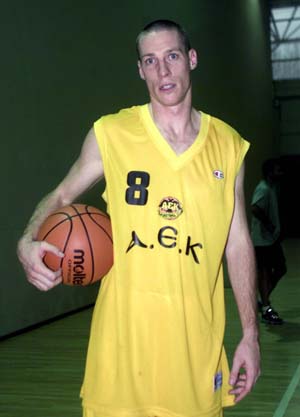 What is your finest memory on the basketball court?

There are a lot so college wise it was helping guide the Gonzaga Bulldogs to their first ever NCAA Tournament experience.  It will be something I always remember and cherish.

And then nothing beats walking out at the Opening Ceremony of the Olympic Games.  Still to this day, words cannot truly describe the feeling I had on that Athens summer night.

What is the weirdest habit that you’ve ever seen from a teammate in your time around the traps?

Wow, where to start.  Kevin Brookes getting his jocks dry cleaned was interesting to me.  Paul Rees checking his wallet ever single game with 8 minutes remaining in warmup.  And Kelvin Robertson always gets changes in a toilet cubical. I’m still trying to find out if he wears a Superman cape under his uniform.

I know that family is a HUGE part of your life. Are you one of those “soccer mums” who get fired up about their kids to the point of going too far, or do you sit back and enjoy the action?

I sit back and watch the action sipping on a coffee but I’m churning on the inside.  You only ever want the best for your family.  I did get a kick out of my son the other day when he dropped a three with time expiring.  He was pumped about it, but I gave him nothing but I was a proud parent at that point in time.

Bruce Bolden and Roger Shiels in a cage fight — only weapon allowed is “the stare”. Who wins?

Bolden wins only if I’m not in the building.  I can break his concentration better than any man alive.  I “soul glo” my hair and sport a safari suit and Bolden becomes putty in my hands.

You’ve watched as much NBL action as anyone in this young pre-season. Who do you see as the team to beat this year?

New Zealand Breakers are the team to beat.  They are solid across the board and should improve on last year’s campaign.  We all know the Melbourne Tigers have a few moves up their sleeve though.

… and who will be the dark horse?

You would have to say the Wollongong Hawks.  The preseaon champs to date need to carry this form over the the regular season.

Who is set for a breakout season?

Preseason would have you believe Hawk Cameron Tragardh.  Gordie McLoud’s system seems to suit the ABA scoring machine plus his body seems in better shape than when he was younger.  Here is a guy that would not be in the league if the YAP rule existed in his early years.  Just some food for thought.

Over in the land of the Star-Spangled Banner, which NBA team/s are you looking forward to watching this season after the flurry of off-season changes?

I’m looking forward to Allen Iverson in Memphis.  Critics underestimate the pride an athlete has in his own perfomance.  AI would not be happy about the way last year went down.  I’m looking for a big one from the little man.

From a team point of view, the LA Clippers.  Can Baron Davis play inspired this year with a young group around him.  And the Cavs.  With Shaq and LeBron, the time is now for the Cavs to win.

Your boy Newls, do you think he is going to find himself joining David Andersen in Houston anytime soon?

Newls is certainly working himself closer to a NBA contract.  If he continues to develop as he has over the past two years in Europe, maybe next summer becomes the cherry on top.

Many thanks to JR for giving up his time for this interview. Be sure to visit his site, JR, On Fire for the latest news on international basketball and more importantly, his insights into the game. But then again, you probably already do.