The Powers That Be

Home » The Powers That Be 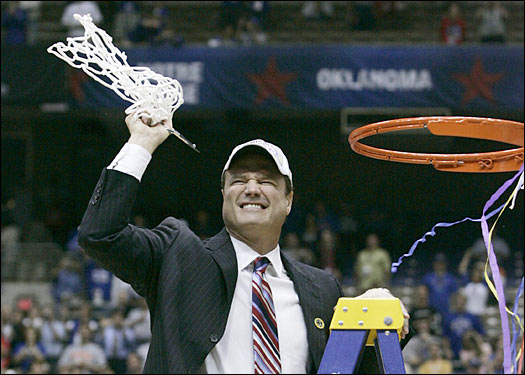 Is anyone surprised at the allegations coming out of the University of Kansas this week? Word is that two power brokers, with the help of an athletic department employee and the father of a Jayhawk basketball player, profited as much as $1 million by brokering the sale of valuable tickets to home games.

The Pump brothers, David and Dana, are the main targets of the probe into the powerhouse Jayhawk basketball program, and their influence within the program runs deep. This investigation has significant implications, with word that head coach Bill Self may have been aware of what was transpiring.

But that is how this game works isn’t it? The Pump brothers run several travelling AAU teams. The funnelling of players towards Kansas from these teams includes the likes of Mario Chalmers and Brady Morningstar, the former, who’s father also happened to be his AAU coach, the latter, who’s father was key to securing the tickets for the brothers.

How about coach Bill Self? Well his son is a member of a Pump team, and the coach has frequented the summer “retreats” that the powerful brokers put on every year. This runs deep into the system, and uncovers more of the shady dealing that takes place in the NCAA on a daily basis. If it were not for a snitch in an unrelated case breaking the news on the UK dealings, the boys over at Yahoo! never would have broke this story.

There is simply too much money to be made in a league where you do not have to pay the athletes. It sounds counterintuitive, but when you don’t pay the players, you must reward them, and their families, in a multitude of other ways, and athletic departments are often quite creative. It is regular to see a highly touted recruits AAU coach hired onto a college staff in an attempt to lure the star player a to a certain campus.

But the trend that continues to emerge through these investigations is that the average fan really has no idea what is going on. They understand that coaches occasionally engage in somewhat unethical practices during the recruiting process, but they do not grasp the depth of the exploitation that takes place at academic institutions around the country.

Whether it is the Pump brothers, or World Wide Wes, or even old Sonny Vocarro pulling the strings behind the scenes, there is so much more taking place in the NCAA then anyone wants to believe. This is supposed to be a way for young men to get an education for at least a year, that is the NBA’s plan, but instead it is a way for more old men to make absurd amounts of money off of these players’ talents.

What effect does this have on five star recruit Josh Selby? He received significant criticism when he decomitted from Tennessee and decided instead to attend Kansas. There was widespread speculation that this was another one of World Wide Wes’ moves, in pushing Selby to a Nike school. But maybe there is more? If Self ends up being seriously implicated in this investigation, and subsequently forced out of his job, will Selby stay put?

Questions abound as another serious scandal has been uncovered in the world of NCAA basketball. But this is how the underbelly operates. Someone has to be profiting off of these players, and don’t think it is just the schools. The amount of money that exists to be made in pushing high school basketball players into selected AAU teams, and onwards to college powerhouses like Kansas is towering, and the Pump brothers were wheeling and dealing.

The University of Kansas athletic department has already announced that they have relieved several athletic department employees of their duties, but therein does not lie the story despite what they will attempt to make us believe. We will be told that the matter has been dealt with internally, and a full investigation will take place. But the reality is that a few slaps on the wrist will be handed out, and life will go on as if nothing ever happened.

Now word is leaking out that the University of Connecticut has fired two assistant coaches as a result of their conduct during the recruitment of highly touted recruit Nate Miles. The stories never seem to stop, they just seem to disappear.

Uconn supposedly committed as many as eight recruiting violations, most of them involving the contact with potential recuits and supplying them with improper benefits. But the one thing that jumped off the page that the staff are being investigated for, is “complimentary admissions or discretionary tickets.”

Those tickets again. I wonder if there were any brokers involved in the admission of these tickets. Maybe the assistant coach and director of basketball operations who resigned yesterday had a hand in this.

Or maybe, the entire system needs to be turned on its head, because no longer is anyone surprised when these allegations emerge. We continue to brush off the allegations that we hear about and attribute it to excessively stringent NCAA regulations. Calhoun and Self might get fired, but they will be replaced by some up and coming kid who has just as much dirt on their hands.

It is a constant game of cat and mouse between the athletic departments of major “academic” institutions, and the regulatory body that is the NCAA, and the powers that be continue to ensure that the game will go on.