All Star Weekend is the absolute best weekend of the year for NBA style ridiculousness. Of course, this year the All Star game being in Los Angeles, city of heightened Hollywood absurdity, the NBA’s stars cranked it up a notch and treated us to some very special style moments.

I have a soft spot for the “T-Mobile Rookie Challenge and Youth Jam*.” Rookes are just so adorable, with their fresh faces and excitement, and for so many of these guys this is the one time they’ll actually play during All Star Weekend, so it seems special somehow. There are always a few gems (so to speak) in this event–remember this is where Dwyane Wade debuted his custom Band-aids.

*Seriously, this is probably the silliest name for a sports event ever–the official name has to have been developed by a committee, right? 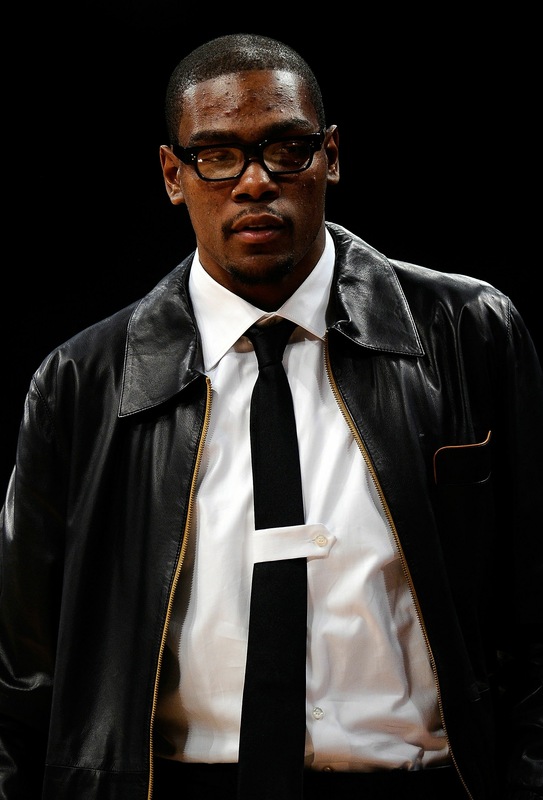 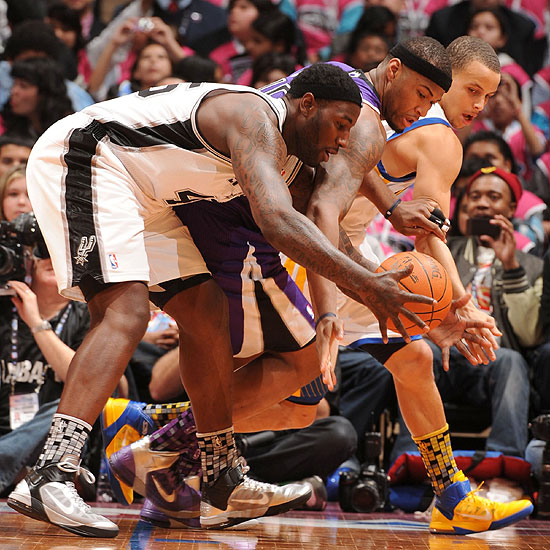 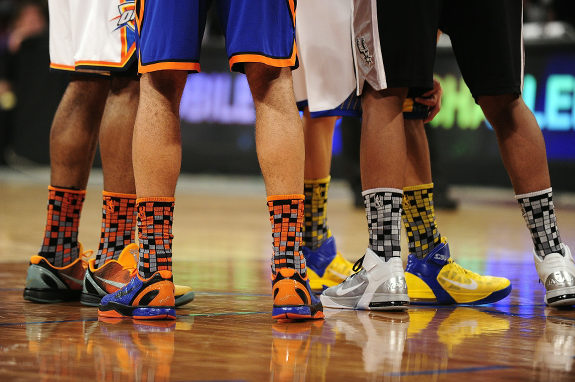 It seems that the socks worn by the rookies and sophomores on Friday night caused much division among the Twitterati. Me, I’m firmly in the pro-crazy checkered socks camp. Wild socks are my Achilles Heel, though, so take that for what it is.* I’d love to see more sock experimentation in the NBA, the possibilities are limitless. (Socks featuring Larry Hughes’ flaming basketball leg tattoo, anyone?)

*Yeah, I went there with the sock/foot pun.

“All Star Saturday Night” is always my favorite part of All Star Weekend, because so many of the guys competing in the big event are present, often looking ridiculous. (This is one of those classic instances in which a confusion exists between “fashion” with “style.” Hint: just because it’s fashionable, doesn’t mean it suits your personal style, guys.) 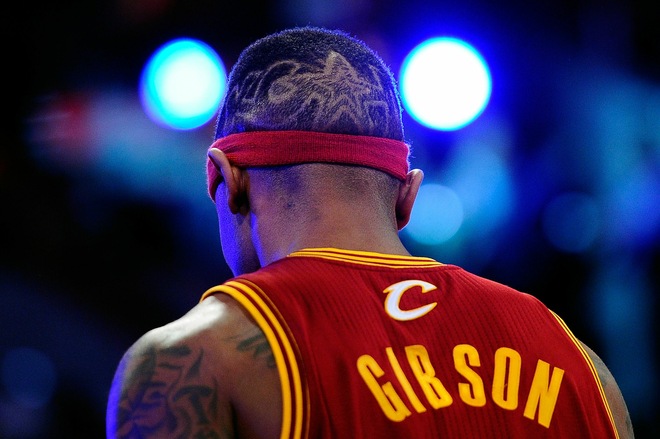 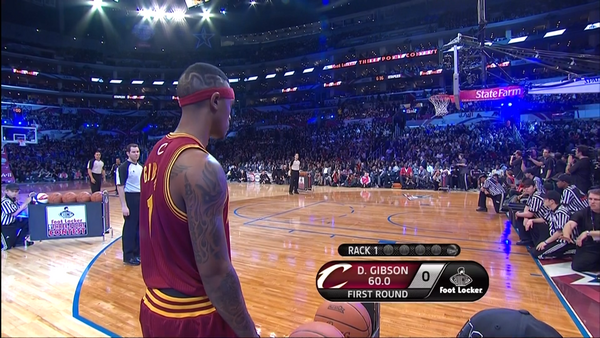 Oh, Daniel “Boobie” Gibson… (Are we still calling him “Boobie,” or did someone finally decide that “Boobie” is a terrible nickname?) Not only was his performance in the “Foot Locker Three Point Shootout” atrocious, his hair defied reason. And, for some reason, the entirely extraneous headband just made the whole thing a thousand times worse. Please, NBA, I’m begging you: never, ever invited Gibson to participate in the All Star festivities–the public can’t handle this hair horror again. 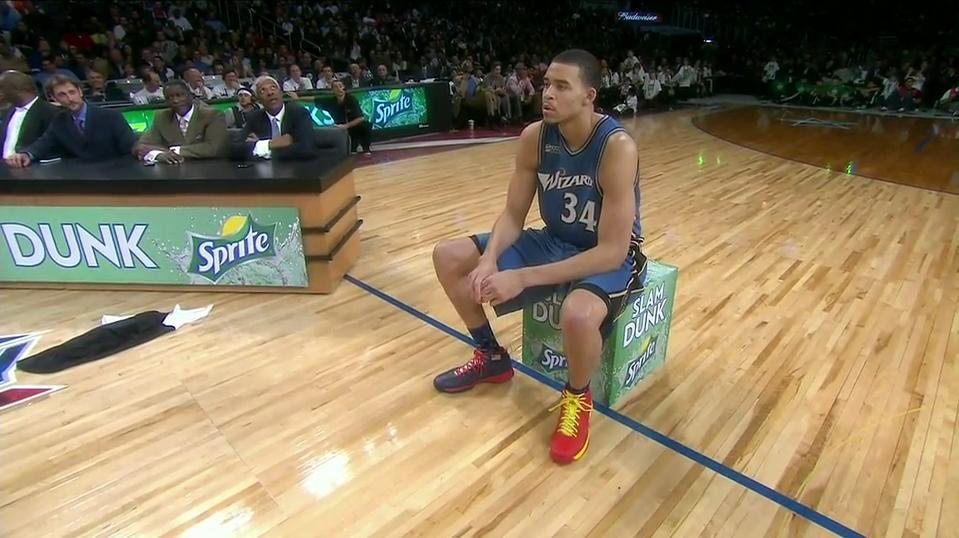 Javale McGee wore two different colored shoes during the dunk contest–and, Peak actually designed five pairs for him to wear during the event. I won’t judge, because I have have both worn two different shoes as a fashion statement (granted, I was 16 and did so as part of a successful attempt to win a contest) and am also a bit of a shoe hound. But, it does make you wonder, did Javale have to wear two different shoes because amidst all those Peaks, those were the only two that were actually made well enough to dunk in? 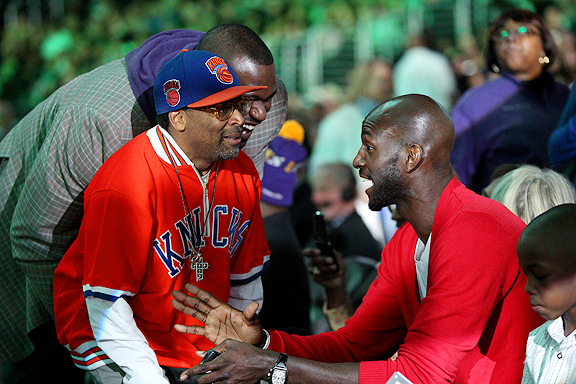 I’m debating as to whether Kevin Garnett either, 1) Borrowed this Li-Ning branded cardigan from Yao Ming (it is in the Houston Rockets red, after all) or 2) KG was attempting to represent brimstone, hellfire and rage in his choice or cardigan. Either way, no one as fiery as Garnett should ever wear anything as snuggly as a cardigan. (Also, am I the only one a little afraid for Spike Lee in this photo? I sure hope he was okay after this encounter.) 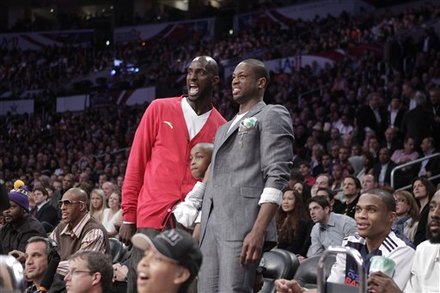 Eventually, I will deal with your undeserved reputation for being a good dresser in a comprehensive manner, but in the meantime I have to point out the absolute ridiculousness of your “All Star Saturday Night” ensemble. The turned-up sleeves, the overly-flourished pocket square and, finally, the odd, swinging ornament dangling off the suit jacket all just scream, “I’m trying way too hard!” 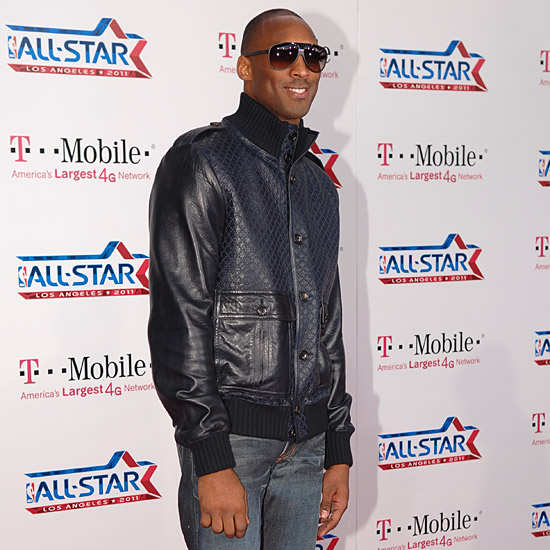 We all know that Kobe takes a helicopter to games, but it’s nice to know his wardrobe is ready in case he needs to fly said helicopter in an emergency. 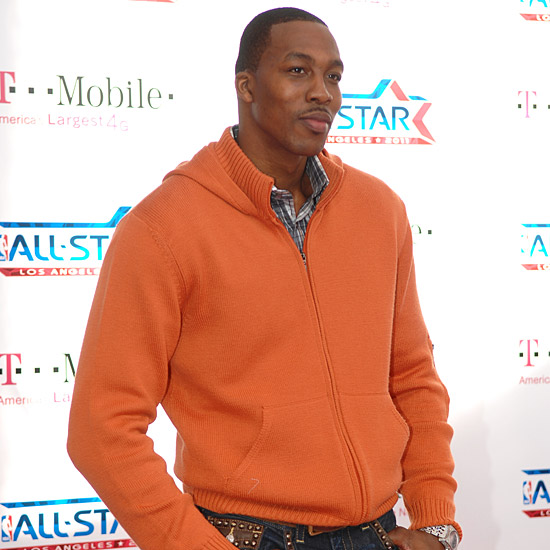 So much orange. So much yarn. I would never have predicted Dwight Howard would show up to the All Star Game looking an awful lot like The Great Pumpkin from Peanuts in this orange sweater hoodie (which appears to be a logical extension of Cardigan Watch 2010, incidentally). 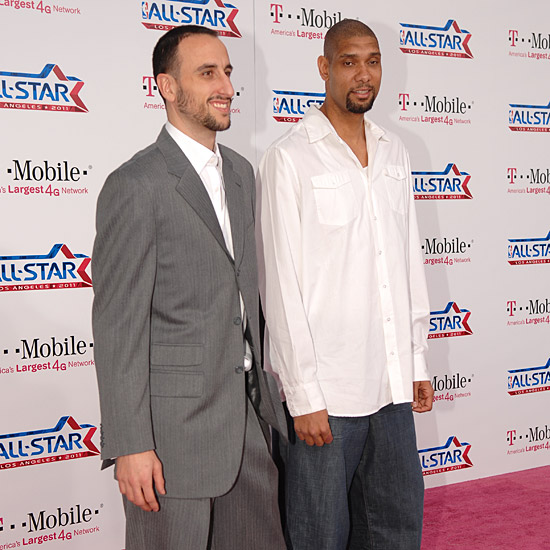 There are so many things to love about Timmy: the wizard tattoo, his soft-spokenness, all the winning, but you got to also love that while everyone else shows up styled to the gills, he’s wearing something that looks like he grabbed whatever was fresh out of the washing machine. (Also, his “Magenta Carpet” interview with rocket scientist Maria Menounos was pure brilliance. Classically trained to deal with the media by Coach Pop, Timmy looked bored while Manu giggled through the “interview” and then informed Maria that he didn’t participate in All Star parties and events, because he’d rather hang with this family. The look of bewilderment on Maria’s face was worth watching the entire pre-game carpet walk.) 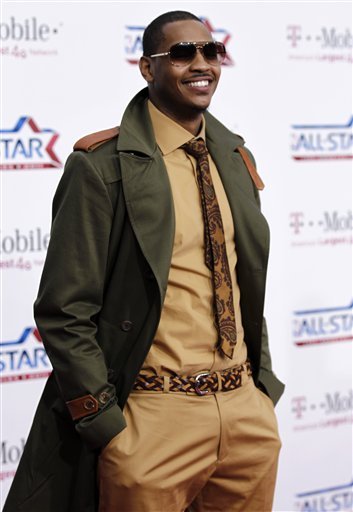 Breaking News: Carmelo Anthony has agreed to sign with the United States Park Service and serve as a Park Ranger Point Reyes.
And, of course, the NBA always treats us to a veritable explosion of classy apparel and accessories designed exclusively for the All Star game. 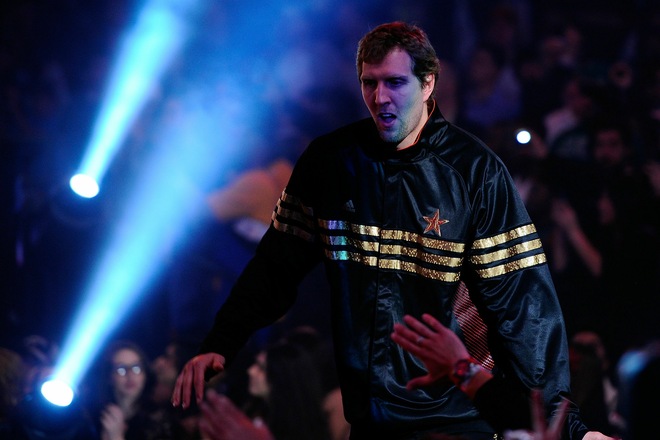 Did they let a committee comprised of NBA team dancers design the warm-ups this year? Because that’s the only explanation I’ve got for why on earth these things were so 1) shiny and 2) sparkly. 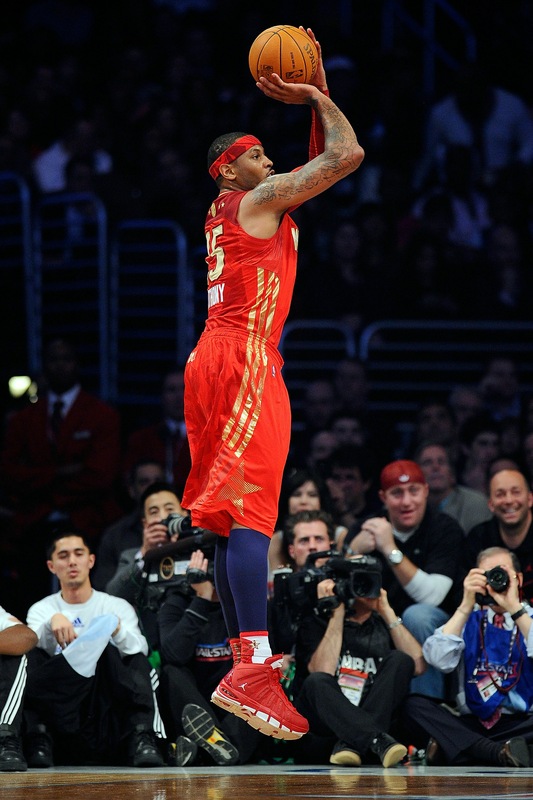 Holy heinous headbands! How about we all agree on this? Let’s never again add flair to sweatbands. Stars, really? A sparkly star on the front of headband? Is this in case we had a hard time figuring out that this was the All Star game? This is about as subtle at the Sprite sponsorship of the Slam Dunk Contest. 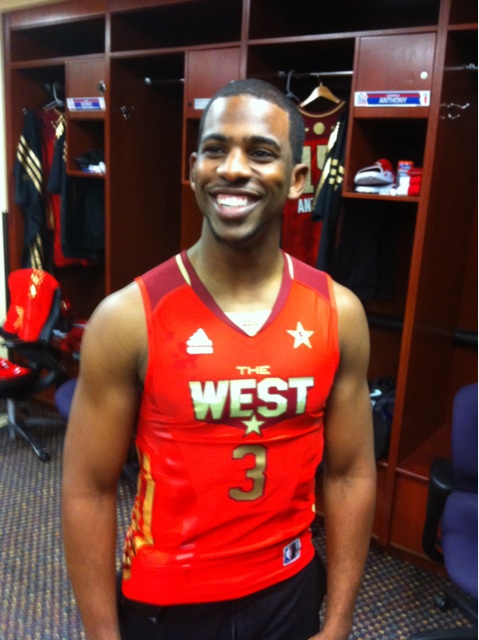 My eyes! My eyes!

Thank goodness players weren’t required to actually wear Adidas’ new “high tech” jerseys. No basketball player should wear something that borderline looks like a unitard. What Adidas executive thought this was a good idea?

And finally, saving the best for last, an extra-special bonus to the 2011 All Star Weekend… 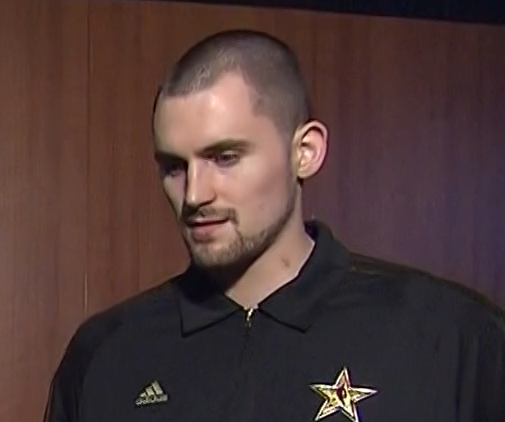 For awhile, I was kind of irked that LaMarcus Aldridge was snubbed in favor of Kevin Love for the final spot on the West team, but then Kevin gave us all the gift of lots of laughs with his giant, high school-style hickey. Glad your first All Star Weekend was memorable, Kev–next time, consider planning ahead and investing in some television-grade waterproof concealer, or perhaps a turtleneck, to prevent such embarrassment.

Sarah Moon is a Portland, Oregon-based writer who spends way too much time contemplating the style hits and misses of professional athletes, especially those in the NBA. She loves rookies, misfits, weirdos, free-spirits, underdogs and anyone who wears their heart on their sleeve, and is the proud originator of the #MorePattyPlease hashtag. Follow Sarah’s thoughts on sports, life in Portland, the awesomeness of tator tots and other random musings and rants on Twitter @SarahSMoon.