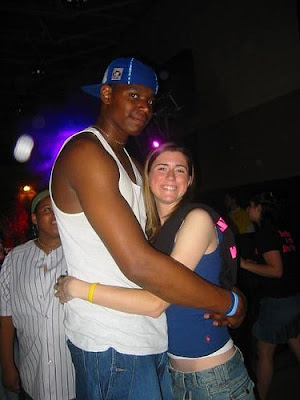 What women want. Andrew Bynum knows it. Jordan Farmar knows it. Now you too can know the secret, for just 10 instalments of $39.95 + p&p.

Well, perhaps the last part isn’t totally correct. However, both Bynum and Farmar said in a recent interview that they know what women are thinking and there are a lot of men out there who would too like to know the secret. Do they teach this in the NBA rookie program? Perhaps that was the study course that Mario Chalmers and Darrell Arthur were brushing up on?

Bynum: Communicate with animals, actually. I think you already know what’s on a woman’s mind, so definitely the animals …

They were both pretty assertive on that point.

Another question asked would they prefer to meet Chuck Norris in a cage fight or match Kimbo Slice in a street rumble. Both opted for Norris. Obviously neither of them have seen this site.

Interestingly, when given the choice of a Laker teammate to select for a 2-on-2 battle, big boy Bynum opted for his big man cohort Pau Gasol, rather than Kobe. Perhaps it was also because Bynum has asked Pau to take him to Spain to introduce him to some Hispanic ladies (another question in the interview alluded to this).

Go ahead and read it, it’s a quality read. I have to admit that the reason I opened the article in the first place was one of shock. I read the headline: “Would You Rather: Andrew Bynum/Jordan Farmar” as a serious question to the reader. I mean, who in their right mind would select Jordan Farmar over Andrew Bynum (apart from an angry Kobe Bryant in a parking lot a year ago talking to some kids with a video camera)?