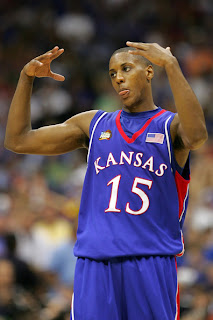 The news last night that new NBA draftees Mario Chalmers and Darrell Arthur were sent home from the NBA’s mandatory rookie program yesterday interested me a little. I can’t say I was shocked, as nothing tends to shock when it comes to NBA players, or professional sports people in general, and their behaviour.
At that stage, the official word from the NBA was that the violations were unspecified.
“The players were sent home for violating program rules,” NBA spokesman Tim Frank said. “They will be appropriately sanctioned and will have to repeat the program next year.”
The fact that the NBA was not revealing anything could just be a privacy issue, couldn’t it? However, where there is smoke there is fire… or in this case, there’s smoke and there’s marijuana it seems.
This news came out today from ESPN, stating that indeed there was more than just smoke at the rookie transition program. Arthur and Chalmers were “caught in their hotel room with marijuana and women, according to several sources.”
If indeed this turns out to be true, this is yet another example of where NBA players distance themselves from the ordinary man or woman in society. That’s not to say that many of us fan-faithful don’t enjoy those very same vices that these young men are alleged of being involved in. Rather, the fact that makes the ordinary Joe in the street cringe is that these guys have been presented with the opportunity to earn millions in a job that they presumably love, yet they can’t sacrifice a few pleasures of life in order to take that opportunity, whilst they are sitting right under Commissioner Stern’s nose.
That is not the best sign to give a new employer regarding your commitment to a job you’ve been hired for. There must be some people in the head offices in Miami and Memphis really scratching their heads over their new recruits and how they will fit into the master plan now.
Henry Abbott at Truehoop wrote some great words yesterday on Monta Ellis’ ankle injury, the potential that it was caused by something other than basketball and the fact that NBA players are people too. He noted that they still need to be able to engage in things like snowboarding without feeling that they have to hide it from their employer — just as most of the rest of us would not have to hide a ski trip from our bosses. I agree with that sentiment to a large extent. However I think most fans draw the line at this sort of behaviour, which is clearly not-conducive to basketball and more so, is a slap in the face to the millionaire opportunities that these young men are being given for their basketball talent.
These sorts of situations must have David Stern clenching his fists, as they bring the NBA inches back toward the dark ages, largely associated with the “gangsta” period of the NBA when Allen Iverson and Stephon Marbury entered the league with their tattoos and bravado. For what it’s worth, Iverson proved to be great for the league, the jury is still out on Marbury, but all of that is beside the point.
The NBA will no doubt come down hard on both former-Jayhawks, suspending them for their first potential NBA games, if indeed they are proven guilty. It’s the only thing that can be done to try and keep the NBA fan-friendly.