The Sydney Kings** visited Wollongong’s old Snakepit on Sunday afternoon, and the Wollongong Hawks* were not the most hospitable of hosts. Before going any further, let’s attach a couple of necessary asterisks to this report.

Now, this will not be a full match report. For that read, you can check out the quality work of Matt McQuade at the official Kings site. What I will do is point out a few key observations I made from courtside, which will be notable to Kings and Hawks fans going into the season.

The game started out with a free-flowing bang as Ben Madgen opened proceedings with a smooth mid-range jumper, followed by an Aaron Bruce three point bomb. Oscar Forman then opened the account for the Hawks with two consecutive baskets. At this stage, it looked like both teams were entering the game looking surprisingly well-oiled, given the early stage of the pre-season that we’re in. Bruce hit two more three-pointers before the first quarter was out, whilst Mat Campbell managed 4/6 from range in the first period for the Hawks. At the end of one the score was 22-22 and we looked in store for a tight battle.

However, as the second quarter began, the Hawks began to show who was boss in this region. Rhys Martin demonstrated what an off-season amongst Australian Boomers teammates and winning the QBL championship with the Mackay Meteors alongside Hawks teammate Tim Coenraad and former King Michael Kingma can do, as he pulled the Hawks ahead in the period. Martin accumulated 10 points, three assists and three steals during the second, as he showed strong penetration and team leadership.

By half-time it was Hawks 41-36, with the home team looking the more well-organised outfit. Clearly years of melding as a team were paying off, despite the undermanned squad. The Kings then struggled through a disappointing 8-point third quarter, to go into the final break down 55-44. At this stage it was becoming apparent that this was still early pre-season and that team combinations were being tested by coach Ian “Moose” Robilliard. With the luxury of a deep roster, Moose was trying different playing groups to see what will work when the season arrives — unfortunately for the Kings though, little was working tonight.

The fourth quarter, a 27-10 Hawks affair, was no more promising than the one before. The Hawks ran their three youngsters for stretches late in the match, with even this failing to be taken advantage of by the Kings, as the game ended 82-54. 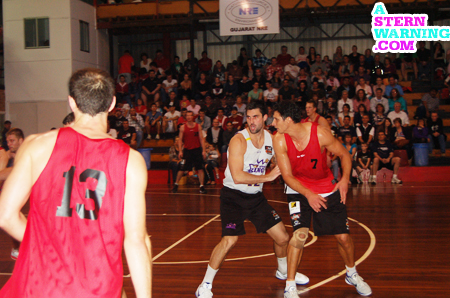 Versatile forward Alex Gynes made his Kings debut in this game, showing a tough-nosed, strong style. It was clear that he was not as familiar with the systems as some of his teammates who have had more time to learn plays (and game experience against Drake University last week), however the Summer Universiade 2011 Australian representative did contribute five points and one rebound in 12 minutes, whilst racking up four fouls. He played both the three and four spots, as the Kings went for large stretches with small lineups.

The Kings started the game with Bruce, Madgen, Anatoly Bose, Kevin Ratzsch and Julian Khazzouh matched up against Martin, Campbell, Glen Saville, Forman and Larry Davidson. It became apparent quickly that the Hawks were doing a good job of camping Davidson (and his long-range shooting) on the perimeter on offence, drawing Khazzouh out, whilst allowing them to isolate the likes of Forman and Dave Gruber down low against the smaller Kings power forwards in Ratzsch, Gynes and Bose. Robilliard was clearly experimenting with these smaller fours, whilst Dann is injured and Grant is yet to arrive on Australian shores.

Before long, Martin Iti made an entrance in the first quarter to provide a “twin towers” presence alongside Khazzouh. This did do some to stem the tide and proved once again that Iti will be a welcome commodity during the NBL season, due to his size and excitement factor alone. He finished with a productive eight rebounds, one block and three points in ten minutes of court time.

The Hawks largely stayed with the same lineup most of the game, mixing it up between their starting five and Gruber off the bench. The three juniors played from two to five minues each. It will be very interesting to see how incoming imports Joevan Catron and Donavan Monroe slot into the familiar Hawks roster as the season gets under way. Both were unable to play in this game, due to immigration clearances, but were present for warmups. Coenraad (recovering from sinus surgery), Zac Delaney, Tyson Demos and Dan Jackson were not present either for the Hawks. The latter three were taking part in the Waratah League Grand Final, coming out victorious over the Sydney Comets. Word is that Jackson may come out of the victory with a new tattoo…

Whilst there was not much in the way of battles for minutes on the Hawks end of the floor, the Kings permutations are still coming together. The betting man would currently put his money on Bruce as the leader in the Kings’ point guard battle. He finished the game with the best performance at the position, in what was a very poor night across the board for the Kings. Bruce’s three treys to start the game were followed by 19 straight team misses from range for the Kings and an overall field goal percentage of 33%. Bruce’s five assists led the Kings, with Madgen contributing four. On the other end of the floor, Rhys Martin had eight assists, to go along with a phenomenal eight steals and 21 points, in what was a very handy night.

Bose continues to show flashes of smooth brilliance at the three spot, whilst Ratzsch does all of the little things to help the team at both ends — generally with little fanfare. Madgen had a solid all-round game, despite his quiet shooting night (3/9 FG), as he added eight rebounds to his assists tally.

How it was won

The Hawks simply looked like the team that had played together, whilst the Kings are in a state of “pre-cohesion”. The size of the likes of Saville, Forman, Gruber and Davidson, coupled with their ability to mostly play on the perimeter, meant that the Kings defence was stretched at all times. Defending a team like this requires a defensive machinery that has been honed by many hours of playing together — the Kings do not yet have that advantage.

As I mentioned earlier, it will be very interesting to see how long it takes for the Hawks imports to fit into this well-established system. No doubt their talent will be appreciated, but much of what makes the Hawks so good is their teamwork, which they showed tonight in spades.