Last night the Sydney Kings played inhospitable host to long-term rivals the Wollongong Hawks, who would have made the trip back down the freeway feeling much worse for wear. Whilst the Kings came out 95-89 victors, this game had plenty of see-sawing intrigue and more than this, a barrel-full of rough stuff.

What did we learn from this encounter?

Anatoly Bose is a cold-blooded assassin

During his NCAA career at Nicholls State University, Anatoly Bose was an absolute offensive machine. He scored at will and carried his squad game after game. Moving back to Australia and starting his NBL career with the Sydney Kings, whilst most have predicted Bose as the favourite for Rookie of the Year honours, there was always going to be a question mark as to how the swingman would adjust to the pro game.

Against the Hawks, Bose had his first game in Kings colours where he appeared entirely comfortable with his shot and his role as a scorer on this team. Often battling head-to-head with NBL 500-game veterans in Glen Saville and Mat Campbell, the rookie did not back down and showed the smooth-as-silk outside shooting touch for which he is much heralded.

When asked after the game as to how Bose felt playing against players of that level of experience, he did not mince words.

“I have a lot of respect for all of those players, I watched them growing up,” Bose began.

He then gave one of the best insights into a player’s psyche that I’ve heard at a post-game press conference:

“I don’t want to say this the wrong way, but I don’t have respect for my enemy. I go in there, thinking I’m going in for the kill. That’s how I was born. That’s how I was raised. That’s how I’ve been playing my whole life. I’ll do whatever it takes to get the win. And that builds success throughout the rest of the team and brings people in the crowd into it.” 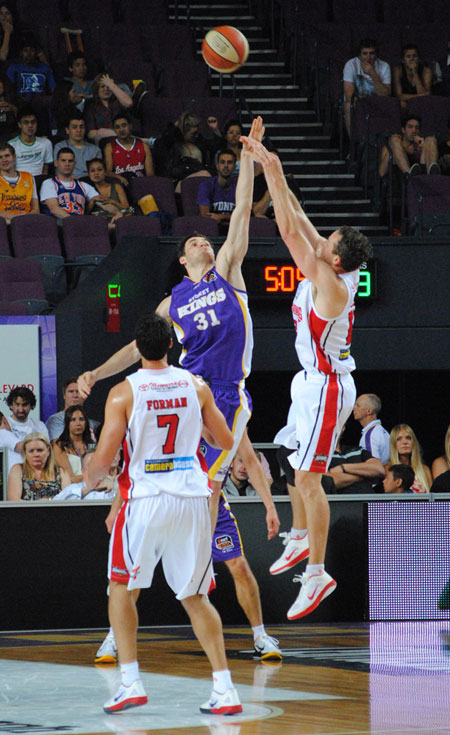 That is the type of mantra that goes into creating an NBL scoring star for years to come. And the kind of mentality that breeds leaders.

Coach Moose Robilliard followed Bose’s statement by highlighting the moment in the game where Bose outstretched on a fast break, attempting to stuff the ball on renowned athlete, Saville. Whilst Sav came out on the better end of the exchange, the exuberance and confidence shown by Bose in that attack on the rim displayed the type of player he is.

Bose finished with a game-high 24 points, on 8/13 shooting, including 4/7 from three-point land in a second-half stretch which secured the victory for the Kings. Once he got going, he did not look like hesitating, showing off his smooth shot mechanics and poise.

Coming into the league, the rap on Bose was that whilst he is a shooting star, his defence left much to be desired. Given this, I’ve been pleasantly surprised to see how aggressive Bose is on the boards (grabbing seven rebounds against the Hawks, second only to Jerai Grant). In addition, his defence has been impressive, regularly challenging shots and hustling for steals (two in this game).

The Kings’ home-opener against the New Zealand Breakers was an embarrassment. The worst home loss in Kings history was not simply the result of the reigning champion Breakers being the better team. The absolute hiding that the Kings received was largely attributable to their absolute lack of intensity and apparent desire. The coach and team admitted as much after the game and upon reflection apologised to their fans in the days subsequent to the game, promising a better effort.

Their visit to Adelaide proved that they had taken their soul-searching seriously, as they won a scrappy game 94-71 on the 36ers’ home court. The next step in the Kings’ redemption was to show their home fans how much they want to win. And from the very beginning of the game, it was clear that this was a changed Kings squad.

Ben Madgen was glued to Saville from the get-go, nudging him and bodying him up in back play constantly. At the very first stoppage, Sav approached the nearest referee to voice his displeasure. A couple of plays and Madgen niggles later, Sav decided to show who is the respected veteran, with an off-ball hit which sent Madge to the floor at mid-court. The veteran Hawk was assessed an unsportsmanlike foul and was given some time to regain his nerve, on the bench, by coach Gordie McLeod.

This early back and forwards was but a taste of things to come, as the game got well and truly nasty at some points. Blood was spilled on the floor as Madgen and Rhys Martin clashed heads late in the game, fouling Madgen out and giving Martin a suspected broken nose. Aaron Bruce was hit by a hard Joevan Catron screen, which saw Kings captain Julian Khazzouh leap to his defence, shoving the Hawks import before all was separated. Wollongong centre Larry Davidson finished with a bandaged head and a possible concussion, whilst Tyson Demos has ongoing issues with fluid needing to be drained from his leg.

It was the intensity not just of the star players that made this game so epic, but the dogged terrier-like hustle of players like Luke Cooper and the hard-nosed, old-school interior defence of Kings rookie Alex Gynes, competing against the always-on Demos. In fact, Robilliard singled out the play of Cooper, Gynes, Madgen, Bruce and Bose in his post-game remarks as key factors in allowing him to trust his instincts in leaving import Kevin Ratzsch on the bench for stretches, as well as veteran Luke Martin and MVP candidate Khazzouh.

Robilliard believes that the intensity change was what got the Kings this win and it is hard to argue otherwise.

For years the backcourt defensive stalwart in Wollongong has been Mat Campbell. The Hawks have always been able to rely on the sharp-shooting and man-on-man coverage of the 500-game veteran, but as the years roll by, his effectiveness has and will wane. Enter 23-year old Demos. The combo guard who started his career with the Gold Coast Blaze, has to be regarded as one of the most disruptive defensive presences amongst NBL guards right now.

Seemingly knowing no limits to his intensity levels, Demos is the type of player who rubs opponents the wrong way and disrupts their flow with his physical pressure defence. In addition, the young guard has a fine three-point shot and against the Kings managed 20 points, including three long bombs, whilst knocking down 7/8 free throws. There is no doubting that Demos has arrived this season as a key contributor for the Hawks in the backcourt. The potential addition of an import guard in the form of Showron Glover may act to limit his minutes, but regardless he provides McLeod with a solid option off the bench.

If anyone was doubting the Kings’ decision to go without an import point guard, in favour of a rotation of Bruce, Cooper and Martin, they simply were underestimating the impact that Bruce would make on this squad. The former Baylor standout and Adelaide 36er has been the clear floor general for the Kings thus far, setting the table on offence, providing occasional scoring bursts and showing understated, but effective defence.

To see the contribution of Bruce in a nutshell, you need only look back to a sequence during round one against the Melbourne Tigers. Bruce played exceptional man-to-man defence on speedster Patty Mills, staying in front of his man before blocking Mills’ shot, then proceeding to go end-to-end for the fast break layup. As I wrote at NBL.com.au, Bruce simply is that good.

Last night against the Hawks, the Horsham product may have had a poor shooting night from the field, but he still managed to nail 10/10 free throws on his way to a 17 point, seven assist outing. There were numerous occasions where it was clear that Bruce was setting the tempo for the Kings and thus keeping them in the game.

Flash back to 2010/11 and for the Sydney Kings to win games, the statistical leaders at the end of the night had to read like a Julian Khazzouh facebook fan page — with his name in lights everywhere. For one of the few times in Kings history since he joined, Khazzouh did not lead the team in any statistical category last night. Whilst he was no slouch and a key contributor is many areas, it was refreshing for the Kings coaching staff to not rely entirely on the star big man to get the win. 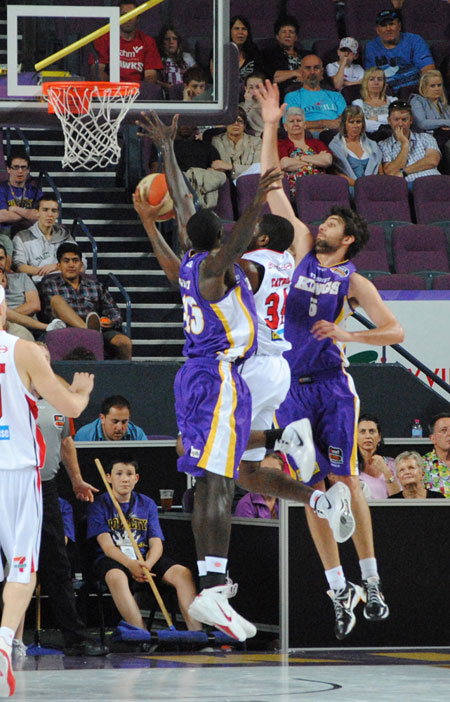 As this season commenced, I’ve maintained that for the Kings to win games, they need both Bose and Madgen firing from the outside, to take the defensive pressure off Khazzouh and Grant inside. Whilst Madgen has yet to have a huge scoring game this season, he has not been terrible so far. Meanwhile Bose exploded in this game to lead all scorers, allowing Khazzouh to chip in with a “meagre” 20 points and five rebounds. Bruce’s 17 points, along with 14 from Grant and 11 from Madgen made for an even spread of scoring.

On the boards, import Grant took most of the pressure away from Khazzouh, in what must have been a relief from his efforts of last season. Grant’s 14 rebounds were impressive in anyone’s language and given that he added them to his scoring line and four big blocks, the Kings clearly have an elite frontcourt.

Sav no longer the scorer?

Throughout his career, Saville has been the man that Hawks opponents focus on. So far in season 2011/12, that appears to have changed and perhaps that is the reason for the Hawks’ subpar record to date. Against the Kings, Sav made 1/6 shots for 4 points, in what is foreign territory for Wollongong supporters.

Will this form continue? Unlikely. Sav is too classy a player and has been dominant for too long for this drought to linger, but in the meantime, it means that the Hawks need to find alternate answers in the scoring column. Tim Coenraad has been billed as a long-term replacement for Sav at the small forward spot. He needs to prove that he belongs as an NBL starter for that to materialise. On the defensive end, Saville is still top-notch, as his seven rebounds, three blocks and one steal proved — thus we know that the athleticism is there, Saville just needs the form to reappear.

We are three rounds into this NBL season and there has been much chatter across the league about poor officiating. I’ve never been one to lambast referees, as they have a very difficult role to play (as anyone who has tried will attest) and I will generally tend to give them the benefit of the doubt if anything. However I must say that so far I’ve been very disappointed with the way games have been called in the cross-section of games I’ve watched.

The no-charge zone under the basket seems to be officiated upon inconsistenty for starters. Fans don’t want to see broken down plays due to erroneous charging calls — the semi-circle under the basket was adopted from NBA play by FIBA for that very reason. The referees need to respect the right of the offensive player to go hard at the basket when defenders are camped in the no charge zone.

Secondly, consistency in general is paramount as an official. During last night’s game the players didn’t seem to know what was allowable and what was not, as at some points clear muggings were allowed, whilst minutes later tic-tac fouls were called at the drop of a hat.

At the moment, it seems that the head of referees needs to review things before condemnation grows.