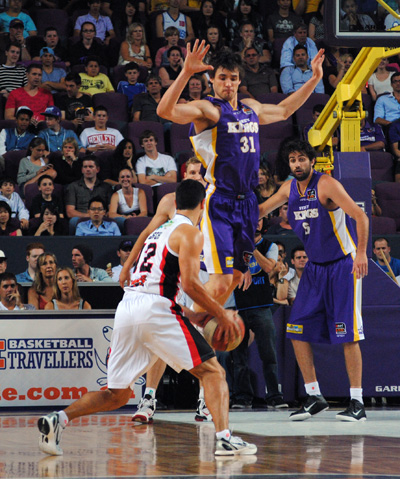 Note: Sometimes life gets a bit busy and it takes a while to get things posted. But here it is!

Friday night saw the Perth Wildcats visit the Kingdome in Sydney. The Sydney Kings team that met them was different to that which has appeared in other lacklustre performances earlier in the season, going down by a mere point in what was an impressive encounter.

What did we learn from this game?

The Kings can play with intensity 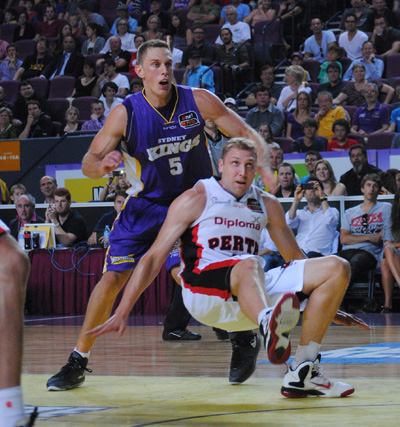 There have been times this season where you really had to question what would motivate this group of basketball players. The players and coach said it themselves when they walked into the post-game press conferences. It just left you wondering.

Various excuses have been proffered. Everything from the celebrities at games distracting the players, to the team just feeling too much “at home” at the Kingdome and thus not feeling the drive to perform.

No matter what those excuses were, when you see the Kings play the way they did against the league-leading Perth Wildcats on Friday, you realise that there can be no excuses. These Kings CAN play with intensity and heart when they want to. And they have the talent to push top teams to the wall. What they need to do to put the cards in the right order, that is a multi-faceted response, but they certainly can start by watching game tape from Friday.

Let’s get this straight right now: it wasn’t Graeme Dann‘s missed free throws that lost this game. Not alone, anyway.

This was the first point that I made with Kings coach Moose Robilliard after the game and he wholeheartedly agreed. Rather, as Moose emphasised, it was the 14 misses prior to that which killed the Kings in this game.

The home team was fortunate enough to be awarded 34 free throws in this game, to the Wildcats meagre 6. The thing is, the Wildcats made 5 of those 6. The Kings only converted on 18 of 34. That 53% is horrendous in any team’s books. 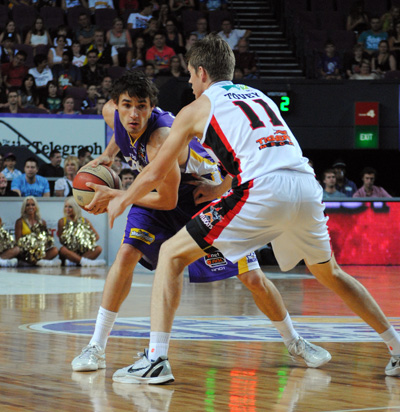 Of course, Anatoly Bose looked like one very angry young man by the end of the game, as he shot 8/15 (53%) during the game. There are positives and negatives to his performance though. He did miss a lot of free throws, which could have sealed the game for the Kings. On the other hand, he did a great job of drawing the fouls to get himself to the line that often. In fact, he drew nine fouls in total — a nice dent in the Wildcats’ foul count. (He scored 16 points but more impressively, pulled down 10 hard-fought rebounds too).

As Robilliard pointed out, the Kings have no problems making those free throws in practice. And they do practice at the stripe. In fact, he estimated that the prior day they had made 26 straight, as a team, at one point.

Perhaps you just put this facet of the game down to pressure and a young squad. Still, it needs to improve if this team is going to pull victories out of close games, getting themselves over the .500 mark and into the Top Four.

The prior week, up in Townsville, the Kings played another epic encounter, pushing the Crocodiles to double-overtime as they ultimately lost 118-114. Once again, they were on the wrong end of the free throw percentage statistic, shooting 22/30 (73%) to the Crocs’ 37/42 (86%). You turn those percentages around and the Kings would have had what was another close game.

The Wildcats do it with defence 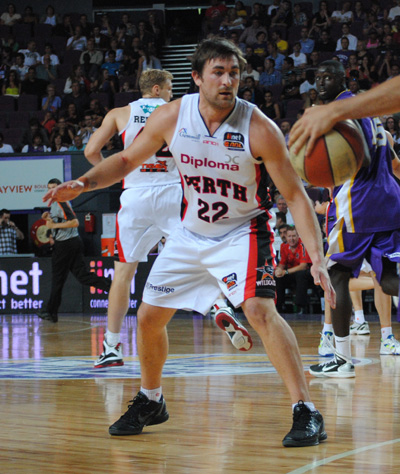 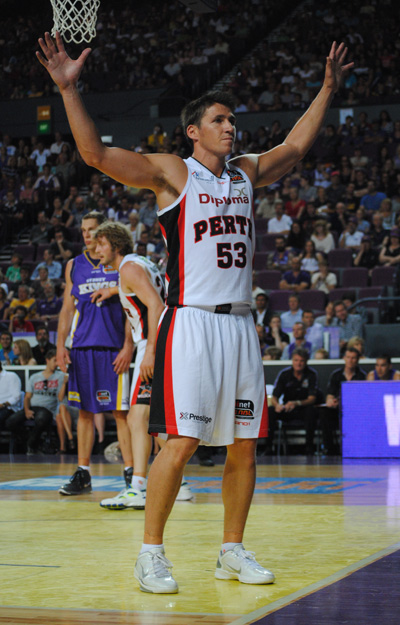 This will come as no surprise, but the Perth Wildcats win games with defence.

As super-coach Rob Beveridge pointed out after the game, they knew that even if their offence eluded them (which it did in this game), they could just keep on sticking it out with their defensive pressure and eventually they would be in with a shot at it.

After one quarter, the Kings were looking very solid, leading 23-17. The Wildcats looked a little shaky — particularly offensively. Damian Martin and Kevin Lisch were not connecting on shots and Shawn Redhage was doing his best to get something happening, but could not. Most of what was working was coming out of Cam Tovey and Luke Nevill, who both had superb games. To be truthful, the Cats looked a little shaken by how well the Kings were playing early on, but the quarter-time talk with Bevo obviously worked wonders.

Coming into the start of the second quarter, the Wildcats turned on the full-court defensive pressure. As the Kings struggled to adjust, the scoreboard clicked over from a 23-17 Kings lead to a 25-28 deficit. That 2-11 run was spurred by the Wildcat’s defensive pressure, led of course by Brad Robbins, Damian Martin and Jesse Wagstaff.

This was not the only phase of the game that the Cats dictated in this way and it was what helped them escape a relatively poor scoring night with a win.

Ben Madgen is firing up Along with Anatoly Bose’s scoring outbursts of late, Kings shooting guard Ben Madgen has been looking for his shot a lot more and has shown to be aggressive on offence. Madgen has reached double-figures in scoring during the past four games — his best stretch since November when he did the same. Aaron Bruce‘s injury has forced a changed make-up of the Kings’ offence, with Luke Cooper and Luke Martin, less potent offensive weapons, allowing the likes of Madgen and Bose to step up. Madgen has scored 24 and 16 in those two games since Bruce went down.

The Kings need Khazzouh to score… or do they? 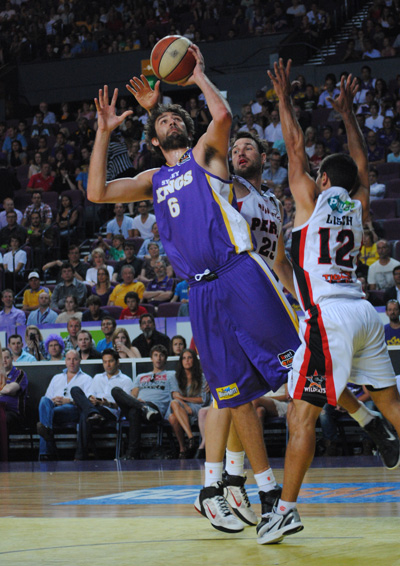 Last season, as the Kings struggled through a pathetic 8-20 season, the team was Khazzouh-Khazzouh-Khazzouh. Every option was Julian Khazzouh, placing inordinate strain on the shoulders of the All-NBL First Team centre and MVP Runner-Up. In fact, I’m pretty sure that there was not a game in 2010/11 where Khazzouh did not lead at least one of the major statistical categories.

This season, things have changed somewhat. And that makes for a healthy team, with balance.

Not so much has been asked of the big guy, but at the same time, many observers note that his performance has gone downhill. Is this the case, or a scenario of misconceptions? Let’s take a look at what the numbers say.

On the scoring side of things, Khazzouh’s points output remains relatively steady, dropping from 17.4ppg in 2010/11 to 16.9ppg this season. However, he is definitely shooting at much weaker percentages, dropping his field goal percentage from 52.7% to 44.9% and his free throw percentage from 79.1% to 70.2%.

In terms of rebounding, Khazzouh has actually improved, particularly offensively (possibly as a result of his own misses!). He has upped his rebounds per game from 10.0 to 11.0. He has also significantly bolstered his blocks per game from 1.8 to 2.3. 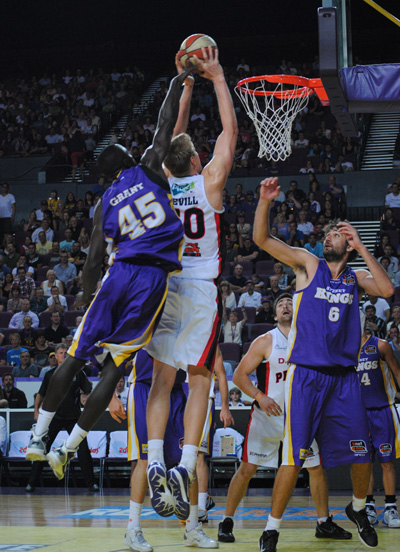 As the team gets a better spread of scorers, with Madgen maturing, along with the arrival of Bose, Bruce and Jerai Grant, it makes sense that Khazzouh does not need to be the sole target on a weekly basis. It makes for a well-structured offence when the load is spread. Yet somehow he has managed to keep that scoring up. Clearly though, he needs to improve his accuracy to be most effective.

What is surprising however, is the fact that he has improved his rebounding and shot blocking, despite the arrival of Grant, who would presumably steal his thunder in this area somewhat.

What has been noteworthy however, is the drop in offensive form that Khazzouh has displayed since his return from NBA trials with the Golden State Warriors. The break between Kings games from 11-23 December allowed the big man to make his way over to the States and show his stuff.

Since coming back to the Kings, his offence has appeared to suffer, both in results and style.

In the 13 games prior to his NBA trial, Khazzouh averaged 18.6ppg at 47.8% from the field. You can see below what percentage that made up of the Kings’ total scoring. 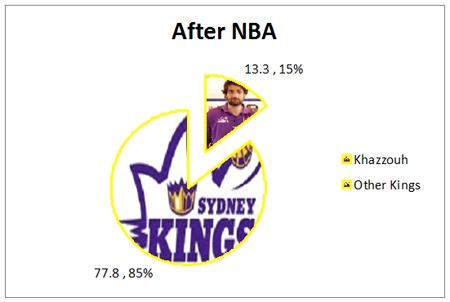 What is significant is how Khazzouh has apparently ‘fallen in love’ with the outside shot of late. Pre-NBA he attempted an average of 1.0 three-point attempt per game. Post-NBA he has upped that to 1.5 attempts per game. The thing is, despite making 10/35 (28.6%) of his three-point shots last season, it really is only at novelty value in terms of NBL-standard outside shooting right now.  This season, the big man has made only 2/22 (9%) long-range attempts, turning those possessions into wasted ones.

There is no doubt that you can not make shots if you don’t take them, but even if Khazzouh were to start hitting at last season’s clip, it is hard to see the immediate value in such a ploy. With him on the perimeter, it takes away the Kings’ most potent offensive rebounder off the glass, as well as their most significant interior scorer. His value in the paint is much higher to the Kings. In terms of improving the shot to a point where opponents have to respect it, it’s not like faking the three will allow Khazzouh to blow by defenders to the basket either, as he really doesn’t have that type of pace (despite being quite agile for a big).

The other problem with this perimeter trend is the reduced number of free throws that he is drawing. Pre-NBA Khazzouh was shooting 7.1 free throws per game (at 68.5%). Post-NBA he has been only going to the line 3.7 times per game (at 77.3% – closer to his 2010/11 percentage of 79.1%). That is a significant drop in attempts.

One thing that has always puzzled me is why the Kings don’t use Khazzouh in a pick-and-roll setup with the likes of Bruce or even Martin. Those guys have the ability to make the outside shot and good decisions off the dribble; and Khazzouh rolling to the basket, with his touch and size, would give him a huge array of opportunities in the mould of a Pau Gasol (a player with a very similar style of game to Khazzouh). Finally there was one such play in this game against the Wildcats and it ran perfectly for Khazzouh as he scored.

But enough about scoring.

On a positive note, it is worth pointing out that Khazzouh has maintained his 11.0rpg average both Pre- and Post-NBA. He has improved his blocked shots per game from 2.1bpg to 2.7bpg. He has also shown marginal improvements in steals and assists Post-NBA.

Is this a temporary or permanent change in style for Khazzouh? We shall see. 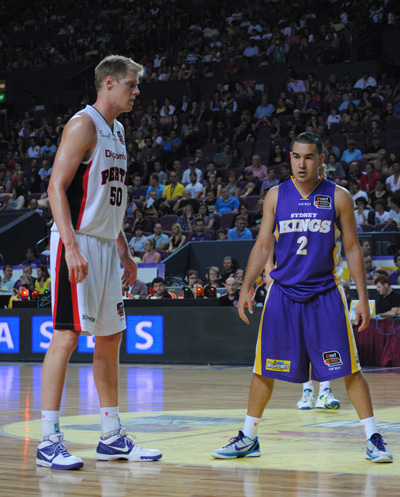 I love this photo and had to include it.