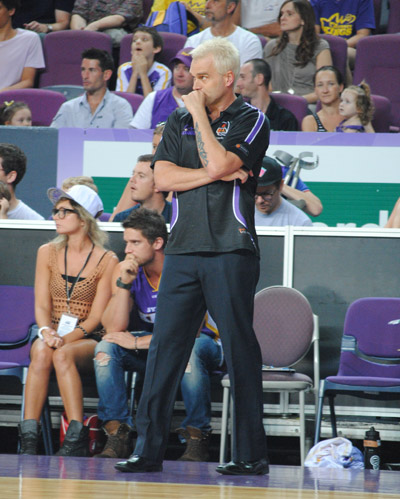 The Sydney Kings may have pulled out the win, by a thread-bare two points, but the style in which the game was played by both teams was not pretty for the most part. The Kings book-ended their performance with 12 and 11 point first and fourth quarters. Any time you score at that mediocre level, you will struggle to win games.

Fortunately for the Kings, the Crocs failed to crack the 20-point mark in a quarter until the final period.

Perhaps indicative of the ugly, slugfest that this was, the Kings won the field goal percentage battle 37% to 35%. That says it all.

The foul count also portrayed the scrappyness of the contest, with four Crocs coming within a foul of fouling out, whilst Luke Martin fouled out for the Kings, with fellow top-scorers Julian Khazzouh and Ben Madgen also hitting the four-foul mark.

The Hammer is back

2003 with the Kings’ first championship under his belt — that was the last time Shane Heal appeared officially for the Sydney franchise. He has retired twice since then and seen time both as an NBL coach and player with the South Dragons and Gold Coast Blaze.

Last night though, Heal returned to the Kingdome on a winning note, despite little preparation time. There was a definite buzz in the air as fans from yesteryear anticipated the impact that their former star would have on the squad which has floundered this season. And it certainly appeared that the new coach’s energy had translated into oncourt intensity for the playing group.

In fact, Martin lauded Heal postgame for the way in which he had brought a sense of accountability to the players — a concept that the coach has stressed in his short time with the team. At the not-so-ripe age of 31, Luke Martin represents the old head of the Kings. That is how young this squad is (see my recent article at NBL.com.au about the youthful talent of the Kings). This game against the Crocs represented Martin’s 250th in the league and boy did he celebrate with a fine performance.

Martin finished the game with 15 points, five assists and only one turnover, in what coach Heal lauded as a needed performance for a team that has been too turnover-prone in previous games. The third quarter, where Martin piled on nine points and three assists, was where he did his most damage, as the Kings managed a 28-15 period to pull away on the scoreboard.

The veteran point guard represents the Kings’ safest ball-handler and best outside shooting option from the point guard slot. No doubt his previous time playing alongside Heal at the Kings and under his tutelage at the Dragons will place him as a trusted presence in Heal’s short run at the team’s helm.

Where to from here for the Kings?

It will be interesting to see how the Kings respond with a proper week of training under their belts with their new coach. Friday brings the slumping Melbourne Tigers to the Kingdome and Heal will be looking for someone to step up in what he sees as a lack of leadership within the group.

Whilst captain Khazzouh came up big on the boards (13 rebounds) in this game, as he has all season, he once again was not a huge presence on offence. His 15 points, whilst an equal team-high with Martin and Madgen, came in a less impressive way than we know the MVP candidate is capable of. The fact remains that the big man has not been the same player in the second half of the season as he was earlier in the 2011/12 campaign.

Jerai Grant was even quieter in this game and no doubt Heal will be trying to fire up the import to show what he is truly capable of against the Tigers.

It will be interesting to see how Madgen, Anatoly Bose and Luke Cooper respond to Heal’s coaching. Given their gritty style as perimeter players, there will be much that they can learn from the former Olympian who embodied perhaps the most firey perimeter style the Australian game has ever seen.

Interestingly, it appears that rookie Alex Gynes‘ hustle has been rewarded by stealing away the minutes previously afforded to import Kevin Ratzsch. Gynes responded with a strong performance against the Crocs.

The team used quite a bit of shot clock most of the night, however Heal does not expect this to be an ongoing issue after an opportunity to run through some offensive sets.