Pacific Rims: Basketball in the Philippines

Editor’s Note: This guest post by Patrick Truby takes a look at the newly released book about one of the most passionate basketball-loving countries in the world: The Philippines. I’m incredibly excited about this book (and to be honest, a little disappointed that the publisher didn’t get the review copy to me that they had promised!). At the bottom of the article are some links to follow Patrick’s other writing. 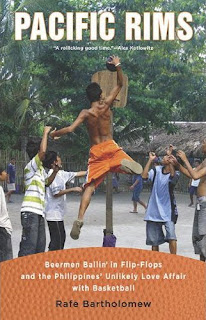 Being half Filipino and growing up in Hawaii, much of my youth was filled with the sights, smells, and tastes of my grandmother’s Filipino cooking, as well as the sound of her chatting up other old women in Tagalog, their native language. I’ve eaten some of the food and know a small selection of Filipino phrases (the naughty ones), but that’s pretty much the extent of my knowledge. I’ve been told by a number of Filipinos that I need to go see my homeland. I would be all for it, but I wouldn’t know where to start, since I have no idea where in the Philippines my family came from or when my grandparents moved to Hawaii.

I’m telling you this because Rafe Bartholomew’s Pacific Rims: Beermen Ballin’ in Flip-Flops and the Philippines’ Unlikely Love Affair with Basketball is as much about Filipino culture as it is about basketball. Bartholomew, an assistant editor at Harper’s Magazine and 2005 Fulbright Scholar, embeds himself with the Alaska Aces of the Philippine Basketball Association (PBA) for a season. The PBA is the second-oldest professional basketball league behind the NBA. Like other PBA teams, Alaska was named after its corporate owner, in this case, the Alaska Milk Corporation (the Aces arch-rivals are the brewery sponsored San Miguel Beermen).

That the immense popularity of basketball in the Philippines makes a franchise an effective marketing tool is only one hint of how the sport permeates through Filipino culture. PBA players and coaches often translate their basketball fame into government positions. Politicians build high-end, roofed courts not only to appease local constituents, but also because courts are often used as community centers.

Bartholomew catalogs the basketball culture by linking its introduction to the history of the Philippines and pointing out that its popularity is not as unlikely as his title suggests. Like Catholicism, which was brought to the country by Spain, Bartholomew writes, “Basketball was also introduced by a colonial power,” this time the United States. The Philippines embraced it, created their own style of circus lay-ups instead of flashy dunks, and even became a dominant international basketball powerhouse from the early to mid 1900s.

Basketball is everywhere. Bartholomew begins the book by finding a pickup game simply by following the sound of dribbling basketballs. Many kids learn to play on makeshift hoops with backboards of planks of wood nailed together. Jeepneys—”a form of public transportation from U.S. military vehicles that once carried GIs around the American naval and air force bases”—are often painted with NBA team logos and players’ faces.

Pacific Rims also boasts its share of fascinating characters. There is Willie Miller, the Aces’ star player and PBA’s “clown prince,” providing moments of levity. There is Rosell “Roe” Ellis, the Aces’ star import player. Roe attended Rainier Beach High School, the same high school in Seattle as Nate Robinson and Jamal Crawford. Roe’s history is presented with the clarity of amazing self-awareness. Before diving headfirst into the events that brought Roe to the PBA, Roe begins his story of how he ended up in the Philippines by asking, “You know I choked a ref, right?” Then there is the unforgettable Billy Ray Bates. Bartholomew picks up Bates’s story where David Halberstam left off in Breaks of the Game. The pages devoted to Bates are simultaneously joyous and heartbreaking. They tell the story of a tragic-hero type figure finding and losing direction through the game of basketball.

Like any good sports book, Pacific Rims has its sequences of cinematic highlights, including a suspenseful game recap where I found myself turning the pages, wondering what would happen next, and rooting for the Aces to pull off a hard-fought win. But the best parts of the book are when Bartholomew links basketball to Filipino culture. When speaking to Michael Tan, who researches gender, sexuality, and public health in the Philippines, Bartholomew writes:

The sport had become not just a pastime for young Filipino men, Tan explained, but a rite of passage. When boys reach adolescence, they receive privileges. Their mothers begin to allow them to roam their neighborhoods freely, getting into trouble but also learning how to carry themselves as men. Inevitably, these boys end up playing basketball, first in their own neighborhood, but then branching out to compete against kids in other areas. These early trials teach them masculine virtues like teamwork, aggression, and machismo…So basketball is there to make friends, build alliances. It even crosses class barriers.

Finally, there is the passage that reminded me of my childhood family dinners, my grandmother’s cooking, and her sitting around the table, chatting forever with her Filipino friends: “Togetherness is one of the most rigid social norms in Philippine culture, and it played a major role in the chemistry of PBA teams. There’s a powerful urge in Philippine society to be part of the group, whether it’s a family, a bunch of classmates, or a basketball team.”

There’s a wealth of information on the internet regarding Pacific Rims. Bartholomew’s website is a good place to start (and has links to order the book, which you should do ASAP). Check out the book’s Facebook page, which also includes a bunch of photos of Philippine basketball. Last but not least, be sure to check There’s No “I” in Blog, where I will be posting an interview with Bartholomew in the near future.

Patrick is a Boston-based writer who grew up in Hawaii and Seattle. He once ate a raw chili pepper in exchange for Ken Griffey, Jr.’s rookie card and now dreams of a Supersonics return to Seattle. He writes for There’s No “I” In Blog. Follow him on Twitter.