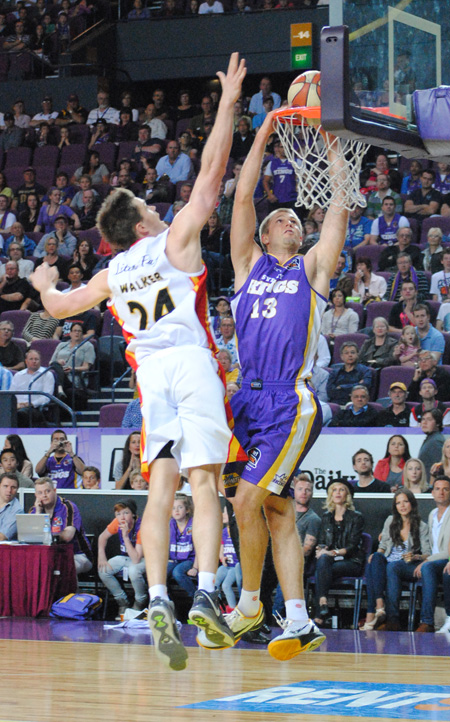 Last night the Sydney Kings once again put on the type of display that made me question their legitimacy as an NBL Finals threat in the pre-season. With a finely oiled Melbourne Tigers machine in full-swing, fans at the Kingdome were treated to another disappointing result, as the visitors went out 94-76 winners.

This edition of What We Learned is going to be shorter than normal, as there simply isn’t that much that can be written that wasn’t already enunciated following the Kings’ demolition at the hands of the New Zealand Breakers in their first home game of the 2011/12 season.

The few positives for the Kings

After witnessing this type of display on the basketball court, few positives can be drawn easily. In fact, this article would be incredibly short if I simply were to list the positives displayed by the Sydney camp and the weaknesses shown by Melbourne.

Aaron Bruce was simply outstanding. As he has been all season, Bruce proved himself to be a top-class guard against the Tigers. Traditionally Bruce would be suited to the point guard role and essentially that is what he is for the Kings, however coach Moose Robilliard has made a point of the fact that he enjoys seeing Bruce off the ball, with either Luke Cooper or Luke Martin handling the point guard duties, allowing Bruce to display his scoring talents as a shooting guard. 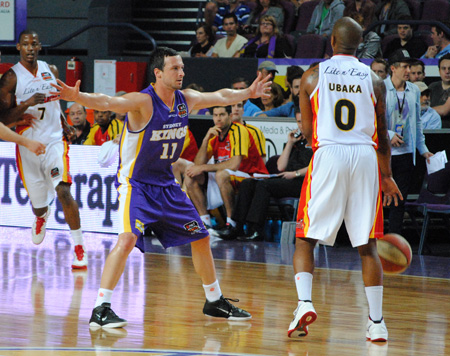 Scoring 25 points, on 9/16 shooting from the field and 4/9 from deep, the Baylor graduate was the only player who was a menace for the opposition every play down the court. Even as the game was shown to be out of reach from an early stage, Bruce continued deep down the stretch to make smart plays and knock down shots to try to keep his team in the game — showing the intensity and passion that appeared to be sorely lacking in many of his teammates. If Bruce were to be afforded some assistance in the backcourt by a consistent performer, things may be different in the Kings’ fortunes this season, however to date not one of the Kings guards has shown that they can be consistently relied upon throughout a full game.

Import swingman Kevin Ratzsch, called upon to step up in the absence of Anatoly Bose (injury), had one of his best games in Kings colours. Whilst he has many detractors in not being the aggressive scoring player that numerous fans believe the Kings need, Ratzsch did do a job in this game. Whilst his shooting clip of 6/17 was not great (along with every other player apart from Bruce), he did have some key stretches that spurred the Kings on, including a sequence in the first quarter where he made a deuce (off some Julian Khazzouh hustle), made a fast break dunk over the athletic Lucas Walker, took a key rebound and then drilled a three. In total he finished the game with 14 points (second to Bruce) and 8 rebounds. Importantly, he had only one turnover in 30 minutes of play, on a team that committed a terrible 19 in total. 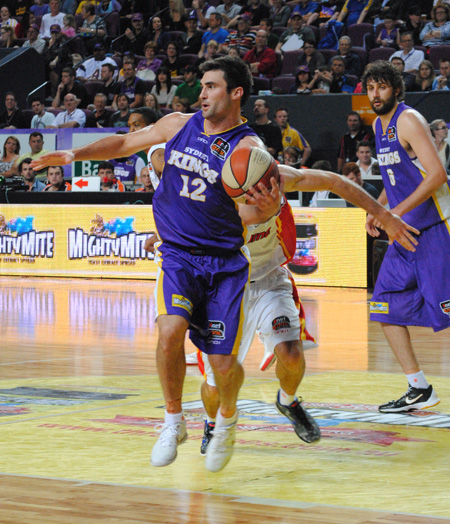 Alex Gynes once again proved that he can make an impact in terms of hustle, if not on the box score. He was one of the few Kings to show all-out effort for every of the 20 mintues he was on the floor. On a pure talent/athleticism angle, Gynes has no business getting court time, but he simply earns his minutes through his intensity levels, which never seem to falter. He does a great job defensively, often as an undersized power forward and has a knack for drawing charges.

Sydney entered this game with a clear advantage down low, with Khazzouh, Jerai Grant and even Martin Iti having the size and length to trouble Cam Tragardh, Matt Burston and Tommy Greer on the boards. Early on it did look like the Kings would use this to their advantage, as Khazzouh and Grant batted the ball back and forwards off the offensive boards, but it was not long before a combination of lack of Sydney intensity and Tigers defensive adjustments stopped that. Khazzouh finshied the game with 16 rebounds (8 offensive) and Grant had 9 (5 offensive), meaning that the Kings had plenty of second-chance opportunities as they won the rebound count 44-27. Unfortunately for them, their 41% shooting from the field and 26% from deep (versus the Tigers’ 52%/36%) meant that they did not convert on their size advantage.

Khazzouh looked sluggish offensively in this game, as he finished with 5/14 shooting for 13 points. There were a number of occasions where he missed shots within 5 feet from the basket, as the ball missed the basket altogether or fell short due to an apparent lack of aggression. Few doubt that the big man is the premier inside talent in the league — he needs to return to the form that gave him that reputation. Whatever it is that he needs inside to fire him up, he needs to find it.

Grant had 5 points, 9 rebounds and 3 turnovers in 20 minutes. He missed much of the end of the game due to a shoulder injury he sustained when jostling for position down low. The impact of that injury will be assessed by team doctors during the week.

Interestingly, no Tiger had more than 5 rebounds (Lucas Walker, Daniel Dillon) in the game, which is almost unheard of for a team that won by so much.  The simple reality was however, that the Kings lack of defence and the wide open shooting of Melbourne, allowed them to shoot at such a clip that they did not need to rebound — negating the very advantage that the Kings had up their sleeve.

Tragardh finished the game with 15 points on 6/11 shooting. Many of his baskets came off beautiful no-look passes from Ayinde Ubaka and Patrick Mills, finding him wide open down low.

It’s all about flow

The way the Tigers ran the ball last night, it was as if they were taking part in a training drill. They ran end to end with remarkable fludity, as either Mills or Ubaka fed athletic players on the break, or pulled up for their own sweet shooting. Mills’ game was a thing of majesty to watch, as he displayed his deft shooting touch and ability to seemingly glide across the court at pace. He scored 20 points off 8/13 from the field and 4/8 from three-point territory, to go along with a season-high 8 assists. It was pleasing to see Mills distributing the ball more in this game, playing more of a point guard role and getting team mates involved, as he let the game come to him. Prior to this game, his highest assists total was 3. 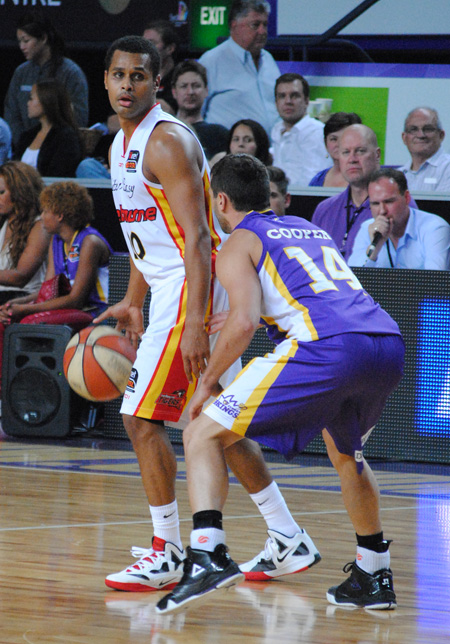 Ron Dorsey made an impact early in the game, which has been a rarity so far this season. Known for his inconsistency in Cairns, Dorsey has the ability to blow games wide open (as he did in the Finals last season), whilst disappearing in others. He has not had a great deal of shots or minutes so far this season, with the wealth of depth that Melbourne boasts, however he did finish with 9 points, 3 steals and 3 assists in this game, after a first quarter where he led the way for the Tigers with 8.

The game outside of the game

In his post-game comments, Tigers coach Trevor Gleeson made a point of highlighting the jibes made in the media about Patty Mills being an “endangered species” and regarding the Kings’ opinion that they deserved to win the first matchup between these two teams. He claimed that these comments gave the Tigers instant motivation, for which they were thankful. However, the reality is that the way the Kings played in this game, no motivation was really needed for the Tigers, with the game being handed to them on a silver platter.

It was not until the final quarter, when the Kings restricted the Tigers to 10 points, where the home side finally came to the party with some strong intensity. It was too late at that stage, of course. In fact, it would not have been surprising to see another 37 point drubbing in the fashion of the New Zealand game, the worst home loss in the Kings’ history.

Where to from here?

Melbourne hosts Cairns on Sunday night, with the likelihood that they will improve their record to 5-1, matching league leaders New Zealand.

The Kings travel to Adelaide once again on Saturday 12 November, as they look to avoid a Sixers team looking for revenge on the Kings, after the successful road trip that Robilliard’s men made earlier this season. The Sixers are a much improved squad since that game, with captain Adam Ballinger and import Diamon Simpson fully integrated into the squad and have a nice victory over the Perth Wildcats under their belts.