To say that last night’s victory by the Australian Boomers over Germany was unexpected is an understatement. Sure, there was always the chance of a win for the Boomers — and all in attendance from both countries agreed that it would be a tight match — but for Australia to pull off this dismantling of Germany was a sizeable surprise.

The Boomers came out gunning from the opening tip, with Joe Ingles picking up where he left off against Argentina, and Patty Mills showing the aggression which so often leads to good things for the Aussies. It meant that after one quarter the scoreboard read 19-7 and the German squad was already in disarray. The contributions from the German guards that had been so prominent in their first two games, were not evident in this game. Demond Greene (0/5 FG), Steffen Hamann (0/0) and Heiko Schaffartzik (2/8) all failed to make a positive impact on the scoreboard in this game and that put Germany in a very tight situation immediately.

On the other hand, Mills put up 16 points (6/10 FG, 4/5 3PT), 7 assists and 2 steals in 24 minutes and was ably supported by Ingles’ 10 points (4/5, 2/3) in the early going. Late in the game, Aleks Maric turned on some scoring touch and he finished with 15 points and 5 rebounds, whilst unfortunately also adding 5 turnovers in what was a continuation of his Argentina performance in the early parts of the game.

No Australian player could be faulted in this game, as a top-to-bottom performance was provided by the Boomers. The only exception to this being Steven Markovic who was notably absent from the bench, after not getting any playing time in the Argentina game. His disappearance was odd, however according to the SMH, he sat out the game through illness.

Damian Martin proved himself once again as a dependable option off the bench as the reserve point guard. As a spectator, I feel totally comfortable in him guiding the team. Whilst he does not have the offensive creativity and spark of Mills, he certainly is a strong defender and solid decision maker.

As always, Matty Nielsen put in a solid captain’s knock for the Boomers. His presence on the court does not always translate to the stat sheet, but steadies a team that can be young at times. Similarly, David Andersen has been a strong interior key for the Boomers. His outside shooting was excellent last night and is a key in spreading the floor in the international game.

It was positive to see David Barlow on the floor and making contributions. After joining the team late in the training camp process, he did not get any time against Jordan and then appeared shaky against Argentina. However he hit the court early before the rest of the team prior to the Germany game and it paid off, as he shot well for 8 points in 17 minutes. I believe that he should be a big part of the Boomers system. 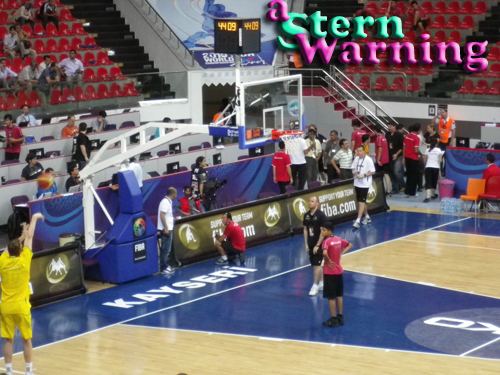 The Boomers dominated all aspects of the game, for an ultimate 78-43 win — a game that the Germans will be happy to forget. The victory was an important one for Australia in terms of group play and provides a positive outlook after a first-up win over Jordan and a narrow loss to favourites, Argentina.

Today is a rest day in Kayseri (Group A), a day much needed by the German squad after three very tough matches. I am now in Ankara where tonight I will watch Russia v Ivory Coast, Puerto Rico v China and importantly, Greece v Turkey in what should be a great game. More reports to come.

Foot note: after all of the fandom of Patty Mills here at A Stern Warning, it was a great thrill to get him to pose for a photo (top of the page).